Welcome to the weekly Sket Dance report! It's another crazy, random episode this week.

Sasuke accidentally broke Bossun's bonus toy car that he won from a candy box. Mimori says her father is collecting something similar so she brings Bossun, Himeko and Sasuke to her home... no, it's a mansion! Wait no, it's a town...

Later, after deciding to stop her high speed 'Captain Munch', Chiaki is challenged by an old foe to a rematch over her 'food fighter' abilities, can she regain her 'Munch' or while Bossun be able to fill in? 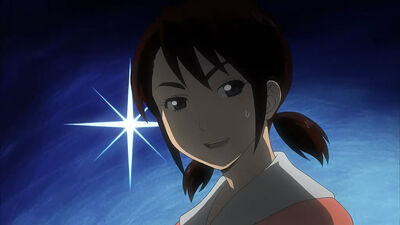 The episode is good but not that great. It's hit or miss with me because some parts are funny while others are poor. For folks who enjoy Chiaki, I think you may like the last episode, Food Fighter, better.

Retrieved from "https://sketdance.fandom.com/wiki/User_blog:Takashichea/Weekly_Sket_Dance:_Ep._74_-_Food_Fighter_Home_Visit?oldid=12354"
Community content is available under CC-BY-SA unless otherwise noted.