Howdy everyone and welcome to the weekly Sket Dance report! Things are getting hectic in Sket Dance since we have two new members for Tsubaki's team. They're quite quirky in their own way.

After Hime discovers a peeping tom who stare at her as she changed in the girls' locker room, she asks Bossun and Switch to help catch the creep. However, Bossun and Switch ignore her plea as they watch a student spider climbing. Meanwhile, Roman and Michinori are having a manga faceoff to determine who is the better mangaka. 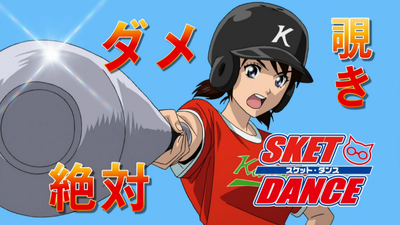 Watch this fabulous episode on Crunchyroll!

Overall, this episode is good. Some of you might love the first story while others will enjoy the second story. For me, I like the first story since it involves Kiri and Hani who are just warming up to Tsubaki's group and Sket Dan.

Thank you everyone for your supports. Sorry for rushing these blogs. For most of my teammates, school is already starting, so it's going to be tough to keep up the Sket Dance wiki work at Anime Vice and Sket Dance Wikia as well as the Sket Dance coverage.

Please if you are a fan, feel free to contribute to the wiki as long as you follow the rules and don't plagiarize/ spam. Also, if you're a wiki editor from another community looking for help, you should help out first. I believe that if you help the community, you deserve the right to ask them to help yours. It's an equivalent exchange.

Retrieved from "https://sketdance.fandom.com/wiki/User_blog:Takashichea/Weekly_Sket_Dance:_Ep._73_-_The_Time_I_Fully_Came_to_Know_Peeping?oldid=12242"
Community content is available under CC-BY-SA unless otherwise noted.