Welcome everyone to the Weekly Sket Dance report! After Sojiro and Shinba are gone, Sasuke fills up Sojiro's spot as president while Mimori becomes vice president. We have two empty seats for two new characters.

Due to recent muggings of students by a ninja named Kagerō, Bossun and Himeko set up a sting operation where they plan to catch the ninja. In the second story, Tsubaki and his student council have a new member on their team, Hani Usami who has her own surprising quirks. 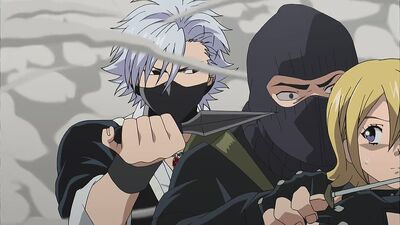 Can the Sket Dan team nab the ninja and what is Hani's quirky secret?

Usami mode - the reserved side who hates men

Thank you everyone for reading this report! Please support the anime and the wiki community, both Sket Dance Wikia and Anime Vice. Also, give them recognition for their hard work.

Also, I contacted the staff to fix the image gallery glitch. It turns out our image gallery was not updated like the other wikia communities.

Utipintar came up with a marvelous idea, List of Sket Dance DVDs. We just had problems with the table columns width size since images distort them.

Retrieved from "https://sketdance.fandom.com/wiki/User_blog:Takashichea/Weekly_Sket_Dance:_Ep._72_-_Chasing_Kagero?oldid=12069"
Community content is available under CC-BY-SA unless otherwise noted.