Welcome everyone to another weekly report! I love looking forward to another episode of Sket Dance because they always have a funny episode that takes away the feelings of a hard week's work.

When Shinba Michiru mentions that Saaya and Sasuke are close, Sojiro thinks they are a couple. He decides to investigate to protect his little sister, and Saaya thinks Sojiro knows about her crush on Bossun. 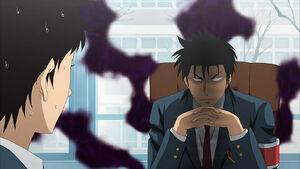 Will Sojiro find out about Saaya's crush?!

Overall, this episode is great and it's not a request based episode. It's a refreshing change while it introduces more of Sojiro and Saaya's relationship. I bet you guys and gals would love the episode if you're a Sojiro fan.

Thank you everyone for reading the weekly report. Please support the franchise and the wiki editors who are working hard in Anime Vice and Sket Dance Wikia.

Retrieved from "https://sketdance.fandom.com/wiki/User_blog:Takashichea/Weekly_Sket_Dance:_Ep._65_-_He%27s_Interested_in_the_Sister_and_the_Brother%27s_Interested_in_Him?oldid=10864"
Community content is available under CC-BY-SA unless otherwise noted.