Welcome to the weekly Sket Dance report at Sket Dance Wikia! Here, we talked about the episode, and I spotlight the wiki work that was done this week in this community.

After 2 Tachikawa punks bully Daisy, Daisy confronts the boss, Yabuta, who forces Daisy to be his woman in exchange to not let his crew harass Kamei high school students. When Sasuke finds out, Daisy rejects his offer to help because she wants to solve these things peacefully and by herself. 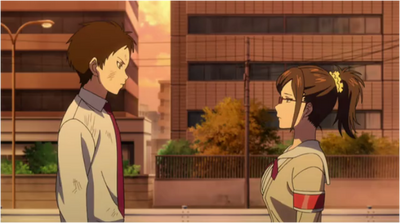 Will Sasuke avenge Daisy's honor without violence or not?

Overall, this episode is interesting and awesome because this is the first time we get to see Daisy up close and personal and her relationship between Sasuke. Bossun ends up being the victim of Daisy for comic relief. That's okay because Bossun has slammed by Koma and slapped by Himeko.

Thank you for reading the Sket Dance Wikia report. If you love Sket Dance, please feel to contribute. The more people getting involved in making badges, blogs, and wiki edits, the better this community gets.

Retrieved from "https://sketdance.fandom.com/wiki/User_blog:Takashichea/Weekly_Sket_Dance:_Ep._59_-_Tsubaki_and_Daisy?oldid=9835"
Community content is available under CC-BY-SA unless otherwise noted.