Start a Wiki
Hello Sket Dance Wikia Community! Though, it's a bit of a late news, but I just have to announced it.

On her blog, she said this:

“I want to get married before I’m 30-years-old… To those who worried and made a joke about my dream, are you relieved now? Lol. Have I surprised you? I almost gave up on it. I didn’t know it would come true. I’m the most surprised! Since it was a rapid development.”

Here are some sketches by two mangaka who congratulate Ryoko on her marriage.

The image on the right is drawn by [Karino Takatsu] (author of Wagnaria!!).

This comic strip is drawn by Takashi Shiina (author of Zettai Karen Children). The character Aoi (voiced by Ryoko) congratulates her seiyuu and breaks into tears when she wonders if she and Ryoko can be together. 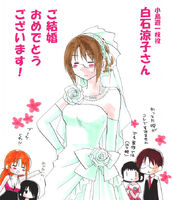 I'm going to list a few major characters since she did so many. For the full list, check out her page at Anime News Network.

Retrieved from "https://sketdance.fandom.com/wiki/User_blog:Takashichea/Seiyuu_News:_Ryoko_Shiraishi_Gets_Married!?oldid=12536"
Community content is available under CC-BY-SA unless otherwise noted.