The Sketchbook Project is an aspect of the anime series' official website which is based around the Kaimei Rock Festival chapters.

Aside from The Pillows' song Funny Bunny, the Sket Dan are looking to include another song for the Kaimei Rock Festival. However, each member has a different idea of what to do and ultimately, visitors to the website will be able to vote for which they want to see appear in the anime. The "battle" between the three is shown through a series of short live-action "episodes" on the website, where the Sket Dan members are all represented by hand puppets in their likenesses.

Voting between the songs Michi (Bossun), PRIDE (Himeko) and Just my Truth (Switch) began on April 11, 2011.

On February 28, 2011, the official website announced open auditions for a male vocalist, female guitarist, and male drummer. The three people selected will make their musical debut during the Kaimei Rock Festival, playing the song decided by the Producer Battle.

On June 9, 2011, with a total of 23 auditions selected as finalists, voting was opened to the public. The finalists are as follows (if any of the names' readings have been listed incorrectly, please don't hesitate to correct them!): 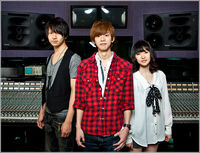 The results were announced July 16 in Shōnen Jump. The 3 winners are:

Retrieved from "https://sketdance.fandom.com/wiki/The_Sketchbook_Project?oldid=5672"
Community content is available under CC-BY-SA unless otherwise noted.