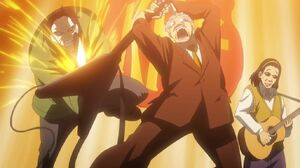 The Teachers' Band (教員バンド, Kyōin bando) is a band formed by three Kaimei High School teachers for the Kaimei Rock Festival. Though their song Falsehood Venus isn't shown performed during the episode, it appears on the official site's Kaimei Rock Festival page along with songs from all the other bands mentioned for the event.

Retrieved from "https://sketdance.fandom.com/wiki/Teachers%27_Band?oldid=5919"
Community content is available under CC-BY-SA unless otherwise noted.