I just came back from a two Day Fate Zero wiki project, and I see a lot of wiki activity. That's awesome. For Sasuke, is the Cat boy tab necessary? I think an anonymous wiki editor added it then Balthierfan fixed it.

In the other character pages, we included past and present. The only deviations are Moe and Delinquent for Momoka and Biscuit Dance for Switch and Bossun. I'm okay with it.

Sorry about that, i considered deleting it but considering that later on it does become a slightly recurring joke i thought i'd just correct it instead. It might look better with a different pic perhaps? Balthierfan 19:20, June 28, 2012 (UTC)

Don't worry about it. Thanks for not spoiling me. I thought it was a one time joke in the anime, but if it's significant, I'm okay with it. I did a stitch cap for Sasuke, but the lighting was weird. I'll add the same picture without the cat. 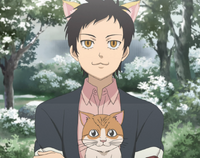 This is what we have so far. Please vote.

When i say a recurring joke it only happens a few times later, and he doesn't usually have the ears (although the eyes and mouth do...). If we keep the image then without the cat. Balthierfan 20:01, June 28, 2012 (UTC).

Retrieved from "https://sketdance.fandom.com/wiki/Talk:Sasuke_Tsubaki?oldid=10588"
Community content is available under CC-BY-SA unless otherwise noted.