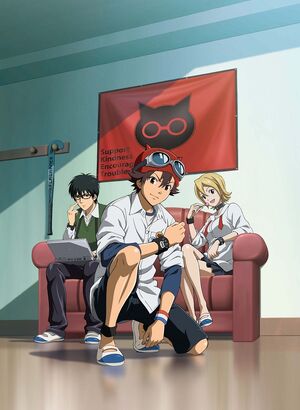 The Sket Dan (スケット団) is a club at Kaimei High School designed as a campus support group. They will help anyone in need and solve any problem, but due to the club's lack of popularity it only has three members.

There are two reasons for the club's name. The first (スケット団), which has to do with using katakana, is a result of the "Sket" portion being an acronym. SKET stands for Support, Kindness, Encouragement, Troubleshoot. The second (助団), which instead uses kanji, derives from the verb tasukeru (助ける), meaning to help or save. The katakana version is more frequently used in the series, but the kanji version appears on occasion.

Community content is available under CC-BY-SA unless otherwise noted.
Advertisement