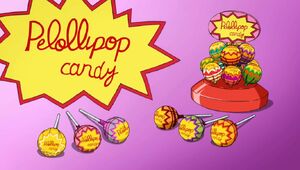 Pelollipop Candy (ペロリポップキャンディ, Peroripoppu kyandei), often shortened to just Pelocan (ペロキャン), is a brand of lollipops with unusual flavors that Himeko is always seen eating. Others who eat it tend to end up vomiting. 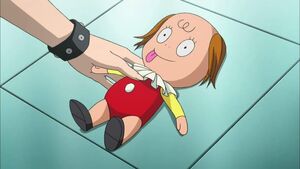 The candy's mascot, a pigtailed girl with a goofy expression, is named Pelorin. In chapter 13, the candy's company had a promotional event whereby you could get a Pelorin doll by turning in a winning Pelollipop wrapper. There were 50 winning wrappers total. Subsequently, Pelorin tied for 23rd place in the First Character Popularity Contest, with 48 points.

The anime version of the commercial, featured at the end of episode 4, consists of a girl playing Shiritori in a classroom with an unidentified boy. All of the words she uses appear to be Pelollipop flavors. Upon reaching a word beginning in "su", she stumbles and presses a Pelollipop to the boy's lips before saying "suki" (I love you). The commercial then cuts to an image of the Pelollipop logo and candy, with the tagline "the taste of youth, always invigorating!"

Retrieved from "https://sketdance.fandom.com/wiki/Pelollipop_Candy?oldid=17588"
Community content is available under CC-BY-SA unless otherwise noted.