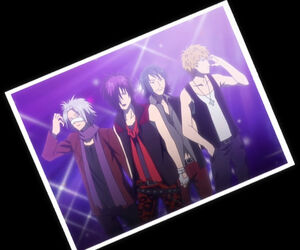 JardiN (ジャルダン) is a visual kei band which appears to be pretty popular among the students of Kaimei High School. They won first place in the Kaimei Rock Festival, where (in the anime) they performed the song Iki toshi ikeru subete ni tsugu.

In a prior story before Sket Dance began, Dante and his group having trouble finding a good band name until they decide to write the band name in the paper. When Dante was not finished writing it, Rodan wants to see what's the word inside the paper, and eventually written as "Jardin" thus approved by Dante's bandmates to have that cooler band name, in which Dante agrees too. Unknown to Dante's bandmates, the origin name of "JardiN" was actually comes from Dante's shopping list, which is also known as "Jardin". [1]

Retrieved from "https://sketdance.fandom.com/wiki/JardiN?oldid=17227"
Community content is available under CC-BY-SA unless otherwise noted.