The Sket Dance CCG (Character Card Game) is a trading card game based off the Sket Dance anime. The cards feature various characters from the series, allowing players to create their own Sket Dan for use in the game. By placing character cards on the game mat and performing actions, players earn SP (Sket Points), and the first to reach 30 points wins. Of course, opponents can utilize "tsukkomi" cards to block or otherwise hinder each other's actions.

These form the foundation of the game, and each center on a certain character from the series. Below is an explanation of the aspects of a character card. 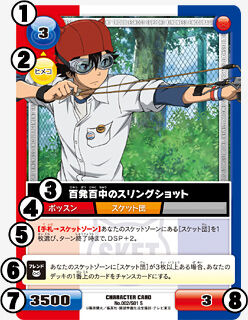 Retrieved from "https://sketdance.fandom.com/wiki/CCG?oldid=16821"
Community content is available under CC-BY-SA unless otherwise noted.